People Are The Chemistry: John Snyder

At Lancaster Laboratories, we believe that our people provide our strength. Their dedication to quality, professional competence and hard work is the key element in the company’s success. In this regular feature, we introduce you to some of the people who have helped make Lancaster Labs an industry leader.

Dr. John Snyder, principal chemist in Method Development and Validation, joined Lancaster Labs nearly three decades ago. Before he held a list of degrees after his name and vast scientific knowledge and experience, he got his start as a technical associate in Lancaster Labs’ Environmental Water Quality Department, in charge of getting samples from sewers in Lancaster City and County. And with his great sense of self-deprecating humor, he reflects, “I think they stereotyped me with that line of work!”

Following a strategic move to Pharmaceuticals, the 1990s would provide significant growth for Lancaster Labs’ pharmaceutical business areas as well as John’s career. John has seen the Lab’s tremendous growth from analytical services to 11 building additions to employees. When John joined the Lab in 1982, there were a total of 35 employees—roughly the same number of scientists in just his current department. Now with more 800 co-workers, John maintains it’s the quality of people and technical expertise that are the heart and soul of this Lab. Here’s a slice of John’s life in his words:

What does your current job entail?
Presently, most of my work is centered around some form of LC/MS. I develop analytical methods to determine low levels (ppb and ppt) range of residues or impurities in drug substances. I also do a significant amount of work to identify unknown chemical impurities that are observed in pharmaceutical products during routine QA testing. I use a variety of mass spectrometers (TOF, ion trap) to isolate the impurity and then determine its accurate molecular mass. It may also be necessary to fragment the molecule and piece together its chemical structure. Hopefully in the end it can be identified.

What is the scope of your department?
Our team develops and validates analytical methods for the pharmaceutical drug development industry. We develop methods that are tailored to meet the analytical requirements presented to us by our clients. During method development we draw on our experience, scientific literature and our problem solving abilities to create a finished method or product. After the method is finalized and written, we validate the method following a formal written protocol.

How would you characterize your leadership style?
I like to think that I lead by example. All my career I’ve worked and tried to do my best. I’ve always sought to get the true answer and not what somebody wants to hear or see. I could never demand something from somebody that I would not do myself.

Given all of your responsibilities, how would you describe a typical workday?
As most Americans would agree, a typical work day can be quite hectic. Most people who know me would say that I am quite intense. Sometimes I will focus on a difficult a problem for a client and become oblivious to my surroundings. Because I often work alone, I can work eight to 10 hours in front of an instrument trying to solve a problem and barely talk to anyone all day. Other days, however, can be interrupted by administrative tasks. Also, because I am the old timer in the group, a number of my co-workers may come to me for technical advice. Admittedly, I don’t switch gears very well. As might be the case with most men, I don’t multi-task well. I am at my best, especially in the laboratory, when doing one thing at a time. But at least I do it well.

You’ve been here for 26 years and seen countless changes. Is there anything that hasn’t changed during your tenure?
The Lancaster County or Pennsylvania Dutch work ethic – The early Germans knew how to work hard and passed it on to their offspring. Our company’s success is built on it. I do not think our company would be nearly as successful today if it was started in a big city.

And when you’re not working?
I spend time with my family – three grown sons, a daughter and my wife. The youngest just graduated from college; so all four made it. I also have two boys, aged 4 – a Golden Retriever named Deuce and a Border Collie named Ollie. I am also athletic (or at least I like to think so.) I like sports; I run, bike and swim. Last week I finished (slowly) in an Olympic triathlon. 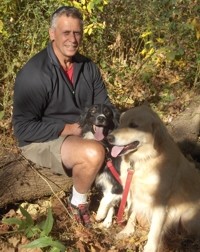 Dr. John Snyder takes a hike with his
“boys” Ollie and Deuce.