In August 2009 the Food and Drug Administration released a guidance for industry titled, Pharmaceutical Components at Risk for Melamine Contamination. The document, identifying various raw materials that are considered high risk for melamine contamination, recommendsmonitoring of these raw materials for the presence of melamine prior to release into production. The FDA also provided links to methodology for both melamine and cyanuric acid that could be utilized for this testing. Both GC/MS and LC/MS/MS methods developed primarily for food matrix and infant formula are presented.

There are two previous incidents that led the FDA to review the potential impact on melamine in pharmaceutical products. First, in 2007 numerous deaths and illnesses in both cats and dogs led investigators to discover melamine in both wheat gluten and rice protein utilized as a pet food thickener, leading to a mass recall of pet food products. Then in 2008 melamine contaminated infant formula in China was linked to the illness in more than 50,000 infants and to death in at least six infants. It is suspected that melamine was intentionally added to both the pet food products and infant formula to artificially increase nitrogen content in these products. Increased nitrogen content could mislead end users into believing the product had a higher apparent protein content.

Melamine is used in the manufacture of a variety of different products ranging from various resin-based products (countertops, glues, housewares, etc.), cleaning products and industrial cleaners. Melamine has a low acute toxicity and is not readily metabolized.

Cyanuric acid is a structural analogue of melamine and is used in the manufacture of herbicides, dyes, resins and antimicrobial agents; it is also used as a stabilizer and disinfectant in swimming pools. Also, it’s utilized as a component of feed-grade biuret (a ruminant feed additive). Cyanuric acid has a low acute toxicity.

Lancaster Laboratories has developed and validated a method to test the majority of the raw materials listed in the guidance document. The method utilizes LC/MS/MS technology, providing greater sensitivity and specificity over other techniques. The method that Lancaster Labs provides achieves
the 2.5 ppm limit listed in the guidance document for the majority of raw materials listed and provides quantitative amounts of both melamine and cyanuric acid in various raw material matrices.

If you would like to find out more information on this topic, please call Lancaster Laboratories at 717-656-2300 and ask to speak to a pharmaceutical client service representative. 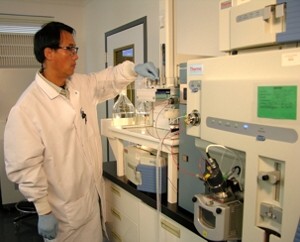