In the area of new technology, Lancaster Laboratories’ recent addition of an imaged Capillary Electrophoresis (iCE280) instrument to the Biochemistry Department has increased the capacity and capability for Isoelectric Focusing (IEF) testing.

Amino acids, which are the building blocks of proteins, can be positive, negative, neutral or polar. Together, they impart the overall charge for a given protein. IEF is a characteristic method for the identification and differentiation of proteins by separating a protein into isoforms based on charge.

The iCE uses a fused silica capillary and continuous monitoring of the protein mobilization at a fixed wavelength. The analysis allows for accurate isoelectric point (pI) determination in approximately half the time of traditional CE-IEF methods by incorporating two pI markers into the sample. The iCE technology allows for higher sample through-put than traditional IEF techniques, such as gel based or traditional CE with shortened run times. 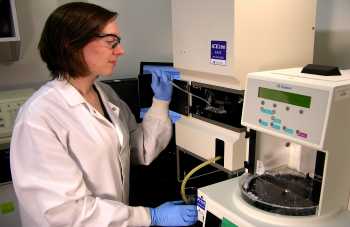