Working with a contract lab on cell based potency assays

by Dr. Weihong Wang, Manager of Molecular and Cell Biology

Biological activity describes the specific ability or capacity of a product to achieve a defined biological effect and can be measured using animal based assays, cell culture based assays, biochemical assays or other assay formats, such as ligand receptor binding assays. Cell culture based potency assays are often the preferred format for determining biological activity since they measure the physiological response elicited by the product and can generate results within a relatively short period of time, unlike typical animal based assays. They are also in general less variable and less costly than animal based assays. Cell based potency assays are often the only functional assays used for product release and stability programs. Other uses of cell based assays include qualification of internal reference standards, characterization of process intermediates and formulations, degradation products and support of changes in the product production process.

Various types of cell based assays have been used to support product licensing and commercial release, based on the mechanism of action. Some common types of the cell based assays used to characterize recombinant proteins/monoclonal antibodies include proliferation assays, cytotoxicity assays, reporter gene assays, cell surface receptor binding assays and assays to measure induction/inhibition of functionally essential proteins or other signal molecules (such as phosphorylated proteins, enzymes, cytokines and cAMP). Most commonly, results from cell based potency assays are expressed as “relative potency” as determined by comparison of test samples to reference standard assay response. The reference standard could be an established national (e.g., USP) or international (e.g., WHO) standard, or a well characterized in-house material.

Due to the nature of cell based assays, method development can be challenging at times. Choice of cell line and assay format is often the most critical factor in establishing an accurate, precise and robust method suitable for QC testing. A cell bank should be created for the indicator cell line and characterized to ensure the validity of the assay and consistent performance throughout the lifecycle of the method. The characterization should include, at minimum, microbial testing (bacteria, fungus, mycoplasma), growth characteristics using well established cell culture conditions, as well as functional stability. Other factors that need to be considered when developing a cell based potency assay include, but are not limited to, choice of reference standard, critical reagents, and statistical analysis.

After a cell based potency assay is established, additional considerations need to be made when it comes to method transfer to a different laboratory, such as a contract testing organization. To begin, sufficient time should be allowed for method transfer. In the case where a qualified cell bank has not been generated, creation and testing of the cell bank itself can take weeks to months. In addition, methods established for R&D purposes may not be suitable for QC testing, therefore time needed for method optimization should be taken into consideration. Also keep in mind that establishing a cell based potency assay in a different lab often takes more than just providing the SOP. Each cell line has its own unique characteristics. Proper cell culture handling technique greatly influences the performance of the assay. If problems occur, on-site visits and training is usually most effective in identifying and resolving the issue. Lastly, once a method is qualified or validated and routine testing begins, appropriate reference standard and critical reagent qualification, as well as continuous monitoring of assay performance, or trending, would be beneficial to ensure there is no significant assay drift over time, which may result in unreliable results down the road. 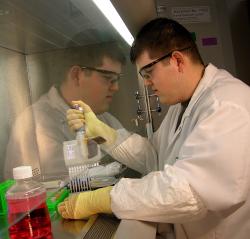