Eurofins Lancaster Laboratories continues to increase its Extractables and Leachables testing capacity and capabilities with the addition of an accurate-mass quadrupole time-of-flight mass spectrometer (QTOF), and establishment of a testing regimen that meets the requirements of BioPhorum Operations Group (BPOG).

The new QTOF system, coupled with an ultra-high pressure liquid chromatograph, provides high resolution accurate mass data for both parent and daughter ions. When this data is combined with our proprietary database of over 1,300 compounds commonly utilized in the manufacture of plastics and polymers, it provides improved ability to identify unknown compounds observed during an extractables study.

The mass spectrometer is equipped with a multi-mode source, allowing for both chemical and electrospray ionization in a single run.

Eurofins Lancaster Laboratories has purchased additional equipment (including incubating platform shakers) to support performing the single-use system extraction as per the BPOG protocol.
In addition, previously established Eurofins Lancaster Laboratories analytical methodologies are in line with the methodology recommended in the guidance document.

Eurofins Lancaster Laboratories performs over 200 controlled extraction studies per year and can design an extractables study to meet your project needs. Whether your study will be performed on a container closure system, single-use system, or medical device, we have experience in designing and performing studies based on guidance from the Product Quality Research Institute (PQRI), the Bio-Process Systems Alliance (BPSA) or BPOG. 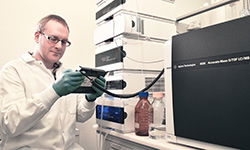