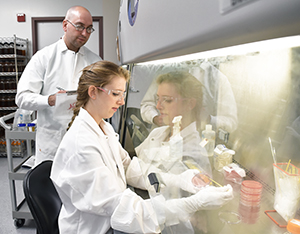 In 2017, the FDA issued an advisory to drug manufacturers concerning the risk of contamination of non-sterile water-based drug products with microorganisms from the Burkholderia cepacia complex (Bcc). This advisory was in response to recent product recalls by several manufacturers due to contamination of their drug products with B. cepacia complex.

B. cepacia is a gram-negative aerobic bacteria that is  widespread and commonly found in soil and water. It is an opportunistic pathogen that has the ability to remain viable under harsh conditions such as low nutrients, presence of disinfectants, and organic solvents. B. cepacia is frequently isolated as a contaminant from pharmaceutical manufacturing processes due to its ability to survive in these various environments. Pharmaceutical water systems are especially susceptible to contamination by this organism. The occurrence of this organism in the manufacturing environment leads to the increased risk that finished drug products will be contaminated with B. cepacia.

The FDA advisory included several recommendations for the drug manufacturers to reduce the risk of Bcc contamination. These included the establishment of procedures to monitor the quality of incoming materials, cleaning and maintenance of equipment, and environmental monitoring. Another recommendation was to establish scientifically sound and appropriate test procedures for detection of this organism for both drug product components and finished drug product.

In the 2001 Pharmacopeial Forum the USP proposed a procedure for the isolation of B. cepacia from non-sterile products as part of the overall harmonization of the Microbial Limit Test chapters. This proposed method was an enrichment procedure which would test for the presence/absence of B. cepacia. The proposed procedure was not included in the final revision of the harmonized version of Chapter <62>. Since that time clients have approached Eurofins Lancaster Laboratories with a request to perform B. cepacia testing on their drug products. Many were looking for this testing in response to questions from the FDA. Based on these requests, Eurofins Lancaster Laboratories has generated a testing procedure based on the information in the Pharmacopeial Forum, which is used for testing both finished drug product and raw materials. The testing includes performance of Suitability testing for the recovery of B. cepacia for each material tested.

It appears that contamination of finished drug products by B. cepacia is a problem that is coming under increasing regulatory scrutiny as evidenced by the FDA advisory. While B. cepacia is considered an opportunistic pathogen with small risk to the healthy population it may cause serious problems for the at-risk populations such as the elderly, newborns, cancer patients, and cystic fibrosis patients. The FDA considers this organism a threat to patient health and safety and will be expecting finished drug products to be free of this organism. For more information, visit EurofinsLancasterLabs.com.