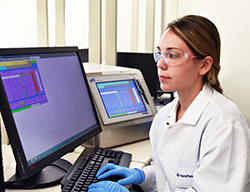 The Chemistry and Container Testing group at Eurofins Medical Device Testing has recently purchased a VeriPac 455-M5 vacuum decay instrument from Packaging Technologies and Inspection (PTI). This equipment can perform leak testing on container/closure systems such as syringes, vials, and pouches. Historically, container closure integrity testing has been performed by either dye immersion (tracer liquid) or by microbial challenge, which are considered by USP to be probabilistic tests. Movement away from probabilistic test methods to more deterministic methods is the focus of the new USP general chapters <1207.1>, <1207.2>, and <1207.3>, which became effective on August 1, 2016, in the first supplement of USP 39 – NF 34.

Per USP <1207.2>, the vacuum decay technique is a deterministic method for detecting leaks. The test is based upon ASTM F2338-09. This technique is nondestructive to the sample and is sensitive enough to detect leaks down to approximately 5-10 microns. Because the test is non-destructive, the same sample can be used for other laboratory tests typically required during stability studies once the vacuum decay test has been performed. This option reduces the amount of valuable finished drug product required for stability testing. Traditional dye immersion or microbial challenge methodologies are destructive to the samples under test, and typically require a significant number of units for method development and validation.

In addition to vacuum decay, the group has also purchased several other pieces of equipment to support container closure integrity testing. The following techniques will be rolled out over the next several months.