Fueled by strong and steady business growth as well as the need to continually hire new staff and expand laboratory capacity, Eurofins Lancaster Laboratories has commenced strategic plans to erect a massive building addition to its South Campus. This comes in tandem with its 2016 Training Center expansion, tripling the size to 6,100 square feet, and new 17,000-square-foot stability building, bringing total storage capacity to 80,000 cubic feet in 80 chambers.

Slated to begin early 2017, this 168,000 square-foot, five-story addition would represent Lancaster’s 13th major expansion in 55 years. This addition on its 71-acre campus will bring the facility footprint to more than 500,000 square feet. And with a constant eye on the future, this new building addition has the potential to be expanded to 425,000 square feet, far larger than the 330,000 square feet that Eurofins Lancaster Laboratories now occupies.

Eurofins Lancaster Labs received tremendous support to help fund the venture from parent company, Eurofins Scientific, as well as a $1M Pennsylvania First Grant and $1.05M PA Job Creation Tax Credits. For the latter, the company has committed to creating 350 new jobs. Occupancy date is anticipated to be end of 2018. 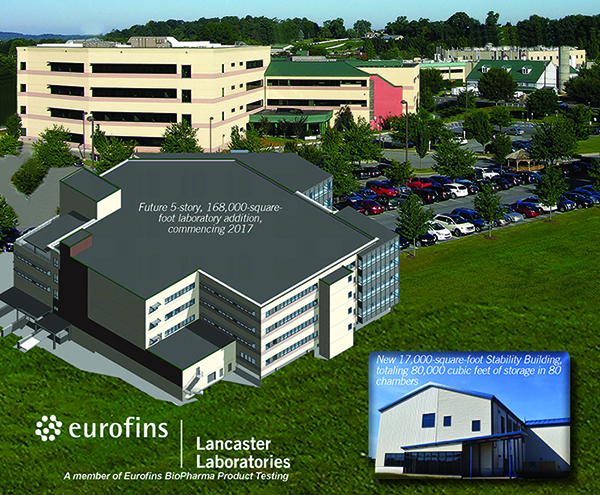 Eurofins Lancaster Laboratories is expanding its Dungarvan, Ireland campus, including the development of a new building as well as expansion of its current facility. Further, as a major employer in the Southeast of Ireland, Eurofins Lancaster Laboratories is set to increase its workforce to over 500 staff by 2021 with this investment by its parent company, Eurofins Scientific. Over 175 new jobs have been created in the past 24 months.

The launch of this major building expansion program combines the expansion of the existing 2,700m2 laboratory with an additional 4,400m2 extension, as well as the development of a 1,800m2 second site on the campus located in the IDA Business Park, Dungarvan. This means that the project will bring the group’s capacity to almost 9,000m2 of state-of–the-art laboratory surface to serve the biopharmaceutical industry in Ireland and the UK. The project is another example of the commitment of Eurofins Scientific to continued growth and investment in its laboratory operations in the region.

“This expansion is the result of successfully growing strategic partnerships with our clients and the value we bring to them and their target markets. And it reinforces Eurofins’ absolute commitment to aggressively funding growth to enhance the way we serve our customers as well as build the best and widest-reaching testing network in the biopharmaceutical market,” said Timothy S. Oostdyk, Ph.D., Chairman, Eurofins Lancaster Laboratories, and Group Senior Vice President, Eurofins BioPharma Product Testing. 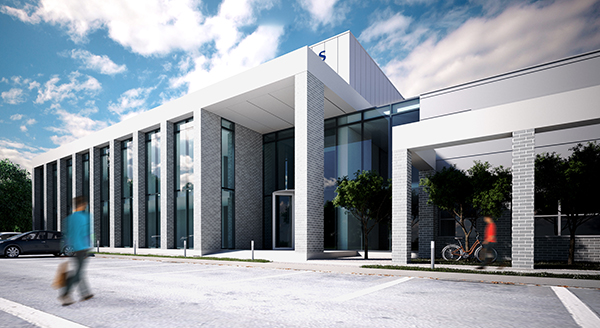