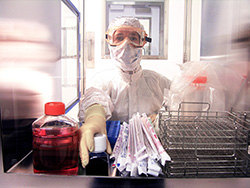 Determination of the biological activity, or potency testing, of a biological therapeutic is a critical component of product quality control. Different types of assays may be adopted for potency measurement; however cell-based assays remain the preferred format within the industry. Traditionally, cell based assays require extended cell culture time. Cells need to be thawed from cryovials and allowed to recover for a period of time (typically no less than 2 passages) before testing can be performed. This process can be labor intensive, costly, and time consuming, which consequently may cause a delay in timely product release. In addition, when cells are maintained for a prolonged period of time, the risk of assay drift may increase. It is with these challenges in mind, that Ready-To-Use (RTU) cells have emerged as an increasingly popular alternative.

RTU cells are cryopreserved under optimal conditions to allow the cells to be thawed and used directly in assays without an extended recovery/expansion period. Often times, the significant reduction of culture manipulation also results in more consistent assay performance. The RTU assay format was initially developed and implemented in QC laboratories by the bioassay experts at Roche (Genetech) and Amgen, and has since been adopted with great enthusiasm by the industry. Successful use of RTU cells can significantly reduce cost, RTU cells in bioassays: increased efficiency and decreased cost increase efficiency and assay consistency, but is very dependent on the quality of the cell bank. 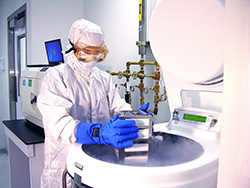 Several considerations need to be made when preparing RTU cell banks. First, since the cells go into assay without a recovery period, high thaw viability (typically >90%) is critical in order to support satisfactory assay performance.

Second, since each cryovial within the bank usually supports no more than a single assay, the consumption rate of the RTU bank is high.

Therefore, RTU banks tend to be large– anywhere from 200 to 1000+ vials, depending upon the frequency of testing. For the same reason (single use), each cryovial needs to contain a high number (5x106 to 2x107) of cells. The creation of such large banks with high cell density and viability can pose significant challenges. Optimal freezing conditions may need to be determined in pilot studies.

Cell physiology prior to banking is critical and key factors typically include the presence of such freezing media components as DMSO and serum. The use of other appropriate media supplements or the use of an alternative serum-free freezing media can also influence the quality of the bank.

Last but not least, a streamlined process to reduce exposure time of the cells to the freezing media while vialing should also be implemented. Cryovials from the pilot studies should be assessed for thaw viability and more importantly performance in potency assay to facilitate the selection of final freezing conditions.