1,4-dioxane is a synthetic industrial chemical that is miscible in water. Its main application was as a stabilizer compound in common solvents such as TCA, and was used to enhance solvent life and prevent decomposition from light, heat, oxygen, and acids. Solvents used in metal cleaning, degreasing, electronics, and many other applications may have contained 1,4-dioxane. It can be found in lacquers, paints, oils, and plastics, and as an impurity in antifreeze and airplane deicing fluids.

­1,4-dioxane has been a contaminant of concern for hazardous waste sites for a number of years due to its use as a solvent stabilizer. USEPA has prepared a summary web page on 1,4-dioxane, with critical information summarized here:

“1,4-Dioxane is used as a solvent.  Acute (short-term) inhalation exposure to high levels of 1,4-dioxane has caused vertigo, drowsiness, headache, anorexia and irritation of the eyes, nose, throat, and lungs in humans.  It may also irritate the skin.  Damage to the liver and kidneys has been observed in rats chronically (long-term) exposed in their drinking water.  In three epidemiologic studies on workers exposed to 1,4-dioxane, the observed number of cancer cases did not differ from the expected cancer deaths.  Tumors have been observed in orally exposed animals.  EPA has classified 1,4-dioxane as a Group B2, probable human carcinogen.”

EPA has listed 1,4-dioxane as a probable human carcinogen; however, there is little information available on the long-term effects on human health. Although 1,4-dioxane is listed as a volatile compound in SW-846 8260B and the Appendix IX list of compounds, EPA currently has 1,4-dioxane listed as a semivolatile in the Target Compound List (TCL) SOM02.2, published in 2014. Originally, EPA listed 1,4-dioxane as a volatile in SOM01.1, after historically not being included in the TCL. EPA has continued to not include it in the Priority Pollutant List (PPL), thus site investigations and remedial designs may have failed to account for its presence.

More than a dozen states have set limits for 1,4-dioxane in ground water. Some states, such as California, have recommended monitoring for 1,4-dioxane in the CA recycled water regulations.  The one in one million (10-6) risk level for 1,4-dioxane is 0.35 ug/L.  Current analytical methods (USEPA 522 for example) are capable of precise and accurate measurements as low as 0.07 ug/L.

1,4-dioxane is not only used as an industrial solvent stabilizer, but is found in a variety of other consumer and industrial products, from cosmetics to inks.

Due to the high solubility and polarity of 1,4-dioxane and the variety of matrices potentially impacted including groundwater, wastewater, soil, and sediment, there are multiple approaches to the analysis of this compound. Eurofins offers several methods for analyzing for 1,4-dioxane designed to meet the data quality objectives of your project.

SW-846 8260 Full Scan Mode
While a traditional GC/MS 8260 analysis can be used, reporting limits are typically higher and relative response factors may not meet your needs. However, the analysis can be combined with other typical VOC testing reducing the need for an additional, separate sample collection and analysis.

SW-846 8260 Selected Ion Monitoring (SIM) with Isotope Dilution
This GC/MS purge-and-trap method is available for water samples only. It offers improved sensitivity and response by using a heated purge and trap, operating the mass spectrometer in SIM mode, and utilizing a 1,4-dioxane-d8 internal standard.

SW-846 8270 Full Scan Mode
This method consists of the solvent extraction of 250-mL of sample followed by a GC/MS analysis. It provides the economic benefit that 1,4-dioxane can be added to any Semivolatile Base Neutral analysis at no additional charge.

EPA Method 522
USEPA method 522 only requires the use of a 100 ml sample to achieve the 0.07 ug/L UCMR3 reporting limit. Eurofins’ drinking water laboratories were one of the first labs in the country to be approved by USEPA for 1,4-dioxane analysis under the UCMR3 program and has analyzed more than 5,000 samples for 1,4-dioxane in more than 500 public water supplies from across the country as part of the UCMR3 program. As testing is completed, results are made publicly available via the USEPA website.  As of April 2014, nearly 20% of public water supplies have been found to contain 1,4-dioxane, with levels as high as 9 ug/L for many utilities drawing water from the Cape Fear River in North Carolina. The widespread occurrence of 1,4-dioxane will likely lead to the future regulation of 1,4-dioxane in drinking water. With that in mind it is important for utilities to not only assess their occurrence data for 1,4-dioxane, but also to consider appropriate public communication strategies for 1,4-dioxane.

The map below shows the occurrence patterns by source water type for 1,4-dioxane in public data available so far. 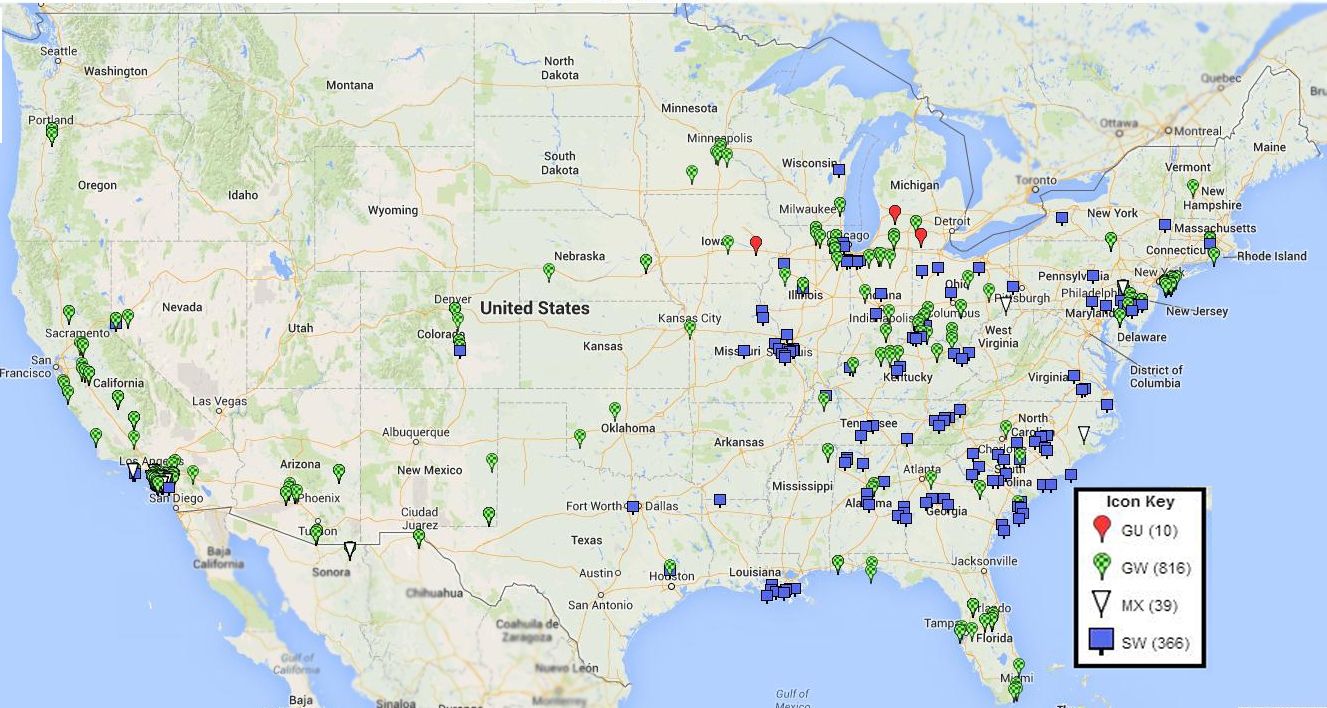