Glycans, also known as oligosaccharides or polysaccharides, are complex, highly branched carbohydrate structures composed of sugars such as fucose, galactose and mannose. They are typically found either attached to proteins (glycoproteins) or lipids (glycolipids). Glycosylation, the process of adding sugar units to a substance (protein), is a common post-translational modification (PTM) in eukaryotic cells. There are two main types of glycans: N-linked glycans, which are bound to the nitrogen on the amino acids asparagine or arginine, and Olinked glycans, which are bound to the hydroxyl oxygen on the amino acids serine or threonine.

Although there is still much to learn about glycans, it is widely believed that they may affect a protein’s functionality and critical properties such as binding, stability, folding, immunogenicity and turnover. For example, the Zika virus has been covered widely in the news over the last several months. Purdue University researchers recently reported that they have determined the structure of the Zika virus. The team found that the glycosylation site in the Zika virus differs from other similar viruses.

This is a significant finding because human cell receptors can bind to the glycan, and understanding this mechanism may help in developing a vaccine. Monoclonal antibodies and other therapeutic glycoproteins, which are common biopharmaceutical products, may contain up to 30% carbohydrates. Therefore, a thorough knowledge of the glycan structure is necessary in order to ensure a well-characterized biopharmaceutical product.

There are numerous approaches employed to characterizing glycans, and there are also many analytical challenges and considerations. Since there are no UV-active chromophores on glycans, they cannot be detected by common quality control lab detectors like UV unless they are labeled. Further, the preparation can be tedious, labor intensive, and technique dependent. Once the sample is prepared for analysis, the various glycans are so similar and hydrophilic that they can be very difficult to separate. Thus, complex chromatography utilizing shallow gradients with long run times and specialty techniques such as Hydrophilic Interaction Liquid Chromatography (HILIC) may be required. In fact, Eurofins Lancaster Laboratories recently participated in a NIST Interlaboratory Study on Glycosylation Analysis to explore results obtained by such a wide range of analytical approaches.

Eurofins Lancaster Laboratories has significant experience analyzing glycans. Information from glycan analysis can be used at all stages of drug development to determine identities and quantities of the various monosaccharides/glycans present, type of glycosylation (N-linked and/or O-linked), extent to which glycosylation has occurred, consistency between batches for release during the manufacturing process, comparison of glycoproteins manufactured using different cell lines, and specifications for stability and release.

A related analysis performed in our laboratory is sialic acid quantitation. Sialic acid is a generic name for a unique group of over thirty 9-carbon monosaccharides that attach to the ends of glycans. N-Acetylneuraminic acid (NANA) and N-Glycolylneuraminic acid (NGNA) are the two common sialic acids found in humanized antibodies (99% usually is NANA). It is critical to measure sialic acid content as it can have significant therapeutic implications. 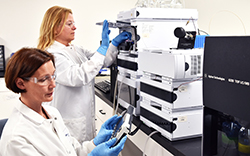